At Vallecitos, the health and safety of our community is our top priority. In order to minimize exposure and slow the spread of COVID-19, the District's lobby is closed to the public. Customers may still interact with Vallecitos staff via phone at (760) 744-0460 or by email.

Behind the scenes during the fires

During a fire emergency at Vallecitos Wate 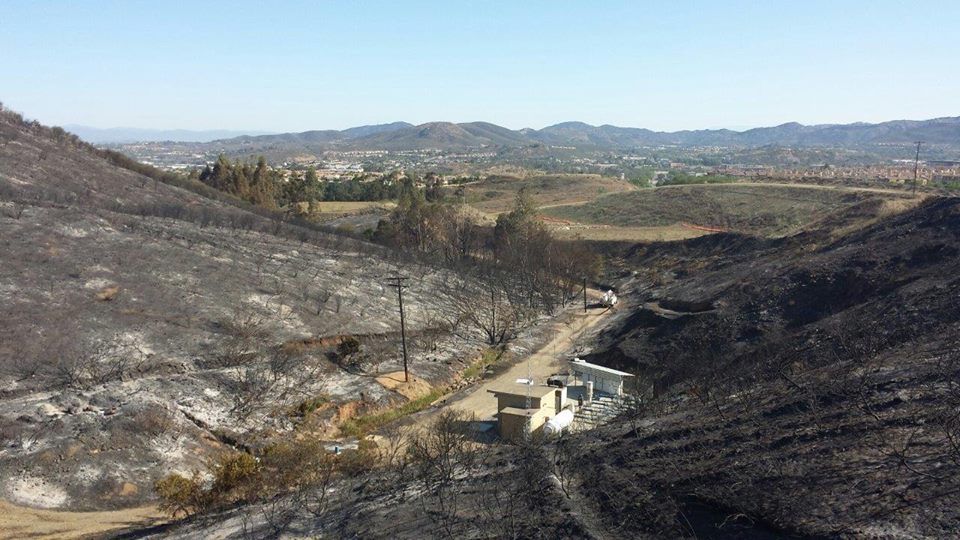 r District, keeping water flowing 24/7 to customer faucets and fire hydrants at various elevations within the public agency’s 45-square mile boundary can be a challenge, with staff working extended shifts around the clock.  But even prior to that, Vallecitos took action based on weather patterns and Board-driven planning that prevented fire damage in the community from being worse.

Vallecitos’ fire preparation procedures actually started when the Santa Ana event was forecasted. The District - who receives 100 percent imported water - made sure enough water was available by filling all of its tanks and reservoirs to capacity and altering its system for increased water flow. But having the water isn’t the only thing that is important. Adopting proactive measures to move it where it’s needed for uninterrupted service is just as critical.

For example, when the Cocos Fire melted communication equipment and electrical connections near the Vallecitos’ South Lake Pump Station, all-important water service was never in jeopardy. Instead, a natural gas engine that serves as auxiliary power to the electric pumps was utilized to ensure a constant flow of water to the firefighters and the rest of the community during this desperate time of need.

Similar foresight also aided the District’s Meadowlark Water Reclamation Facility, which recycles up to 74 percent of the wastewater generated in the District’s service area.  Although electricity was suspended during the initial stages of the Poinsettia Fire in Carlsbad, the facility’s functionality was never threatened due to generators present on site. Without the generators, water recycling would have ceased, raising the demand for imported supply to the region, and sewer spills may have been a reality.

Also thanks to staff’s ongoing testing and water-monitoring diligence, the District’s water quality continued to meet or exceed state and federal standards regardless of the supply system being under the duress of meeting more than 1,000 gallons a minute to fight the fires.

When you combine a progressive Board and management team, with an agency that is well prepared for emergencies, you have the Vallecitos Water District - a staff of more than 100 skilled water and wastewater specialists dedicated to doing all that is needed to maintain service reliability to protect the community we call home.